A dog, abandoned with a note stating that he needs a new home, was found tied to a no dogs sign near a beach in South Carolina. According to Live 5 News, the dog was found at Folly Beach on Thursday afternoon.

Tanya Niketas was the good Samaritan who discovered the abandoned dog. She told the news agency, “”It was disturbing, to say the least.” In a Facebook post, she described how the black and white dog was found:

“He had no water, only the role of tape they used to put up the ‘he needs a new home’ sign.”

The woman who found the dog contacted the Folly Beach animal control – the dog has since been turned over to Pet Helpers, a James Island adoption center. “The animals we take in will stay here until they find their forever home,” Pet Helpers Director of Shelter Operations Melissa Susko said.

The adoption center is offering a $1,000 reward for information leading to the arrest and conviction of whoever abandoned the nine-month-old pup. 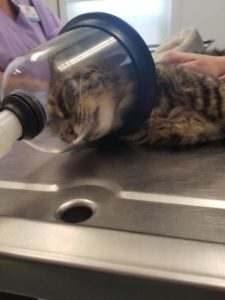 Labrador retriever dies from saltwater poisoning after day at the beach