You are here: Home1 / News2 / animal cruelty3 / Devastating news about dog dragged behind truck in Alabama 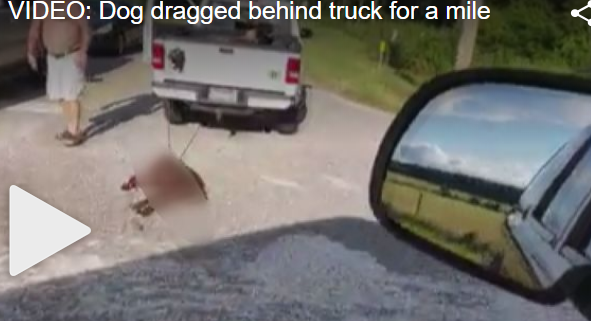 There is devastating news about the dog who was dragged for more than a mile behind a truck in Alabama. According to WKRG News, the dog’s injuries were so severe that he had to be euthanized.

The dog jumped or fell out of the bed of a truck which was traveling along down County Road 95 in Elberta. Jim Horak, the good Samaritan who witnessed the terrible situation, tried his utmost to alert the driver, but the man would not stop. By the time the driver stopped, the brown dog was grievously injured – a trail of blood left on the roadway where his body was dragged.

Horak was appalled by the deadly incident and he wants to see Alabama laws changed. Currently, it is legal for dogs to ride in the back of vehicles. On Tuesday, Horak posted to his Facebook page:

Almost 20,000 people have seen the video so far and not a single person that I’ve spoken to opposes that we change the law! We are living in 2018 people! We now have laws to protect controversial issues like gender neutrality but not a common sense law to protect man’s most loving and loyal companion in all situations! C’mon!! No more excuses! If Alabama drops the ball this time they are going to be dealing with nonstop calls from around the world for awhile! Keep sharing and demanding a common sense law be put in place now! Thanks for the support!

Horak expressed grief over the death of the dog, a two-year-old pointer whose name was Charlie:

I have never shed tears over some stranger’s dog until now. I won’t ever forget him looking up at me laying on the pavement as if everything was going to be alright. Still optimistic looking and trusting of his owner until the end… Sad story. Makes me feel so ashamed of human beings. I hope with social media something changes from all of this. RIP Charlie. I wish I could of saved you.

Today: Outrage after protective mother cow and her calf are slaughtered – read why here.

Man who tried to stop puppy from being abused was murdered by alleged abuse...