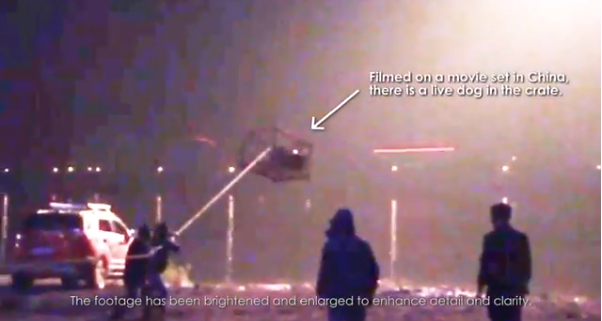 A damning video, released to PETA by a whistleblower, appears to show a dog being abused on a movie set in China. The footage is reported to have been obtained while filming Chinese director Hao Ning‘s upcoming movie, Crazy Alien.

In a release, PETA describes what the whisteblower’s footage allegedly reveals:

(the video) appears to show a young German shepherd locked inside a cage, suspended 20 feet in the air, spun around by a crane, and then plunged into a frigid, fast-flowing river.

The whistleblower described what was happening:

“On November 28th, 2017, I witnessed first hand one of the worst animal cruelty acts I have ever seen.”

“The next shot was at the river’s edge where the dog was put back into his cage and tormented into a frenzy once again. This time … the cage … was hoisted 20 ft. and was flung while spinning out of control towards the river. … [T]he cage was completely submerged with the dog in it landing in a 10 mph current. After 5–8 seconds, the director yelled out “cut.” … A final decision was made by the director to shoot a second identical take. I could not believe my eyes.”

One of the actors in the movie, Matthew Morrison, has taken to Twitter to voice his own outrage over what apparently happened to the dog:

“I’ve just been made aware and seen a video from the set of a film I worked on in China. My heart is broken to see any animal treated this way. Had I been on set or known about this, I would have made all efforts to stop this. I’ve called the producers to express my outrage.”

You can view the YouTube footage of the alleged dog abuse at this link.

Recently in the news: Dog accidentally flown to Japan gets a ride home on private jet