Police in El Paso, Texas, are investigating a case of possible animal cruelty after a young puppy, just eight weeks of age, was allegedly thrown from a car window onto a freeway on Saturday, May 12. As reported by KFOX 14 News, a witness was able to pull over and grab the puppy from the roadway.

What happened to the young puppy?

Until the authorities can question the driver of the car, it is unclear if the puppy jumped out of an open window, or if he was thrown. The witness who stopped to pick up the pup called animal control for assistance. While waiting for an officer to arrive, a woman stopped to “inquire” about the dog and she also claimed ownership. The witness refused to hand the injured puppy over to the woman.

Though the witness did not hand the puppy back to the woman who claimed to own him, they were able to snap a picture of her and turn it over to the authorities. Now the police are hoping to identify the woman and question her about what happened. Sgt. Robert Gomez, with the El Paso Police Department, said, “If the dog was thrown out of the window, of course, this is an animal cruelty case. We are grateful that the witness did stop and rescue this animal from getting run over.” 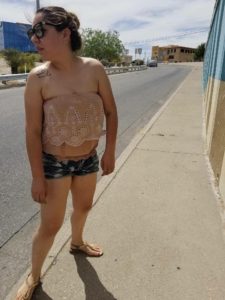 The woman in the photo is not currently facing any charges – she is only wanted for questioning. The puppy has some injuries but he is expected to be okay. The puppy was taken by animal control.

(Via Facebook/What’s Up El Paso)

Handler’s call to K9 partner is met with ‘eerie silence’