A couple in Braintree, Massachusetts, recently made a horrifying discovery inside of their neighbor’s home. Suzanne Rayberg and her husband were concerned because they had not seen Brandy, an American bulldog, outside for months…her owner had disappeared inside of his home as well.

In a fundraiser, Rayberg explained why she was concerned about her neighbor’s dog:

In the last few months we noticed we were not seeing Brandy outside anymore and we were concerned. We  had always been close to Brandy, visiting often and babysitting whenever necessary, last year my best friend and I even stayed with her for over six weeks when the owner was hospitalized. Recently I made calls, texts and attempted visits, but all to no avail. Neither Brandy nor her owner seemed to be leaving the house. I would occasionally get a response to a text ,but nothing helpful.

The shocking discovery next door

A few days ago, Rayberg was unable to sit and wonder what was going on next door anymore, so she went to her neighbor’s house and knocked on the door. What she saw inside shocked her; she wrote:

“She (Brandy) ran up to us immediately when we entered the house. It was so shocking that I lost my breath. How she was living is beyond explanation. We kept it cool and calm, but we were dying inside seeing her health and living conditions. We could barely breath.”

The once healthy dog was skeletal – nothing more than skin and bones was left of her beautiful body. The couple asked Brandy’s owner if they could take care of her and he agreed. They proceeded to rush Brandy to VCA South Shore in Weymouth – a veterinarian has confirmed that Brandy’s dismal condition is the result of starvation.

Thousands of dollars have been donated for Brandy’s ongoing veterinary care and when she is healthy enough, she will be going to live with her most recent owner’s ex-wife (who lives thousands of miles away). The man who was most recently in charge of Brandy was also in a poor state of health – physically and emotionally. According to WCVB News, Rayberg phoned the authorities for help and the man was observed being loaded into an ambulance and taken away from his home.

Absolutely awful. Neighbors noticed they weren't seeing the friendly next-door dog like they normally do. Two months later, they made a horrifying discovery. http://bit.ly/2yI0zcr 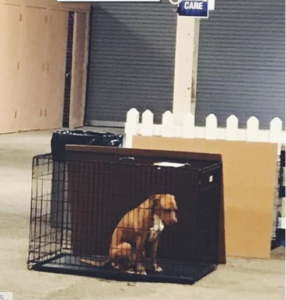