You are here: Home1 / News2 / Odd News3 / California mother conducts an experiment that will make your stomach t... 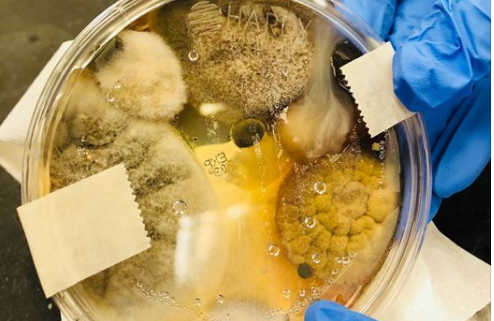 It’s the height of cold and flu season and you have undoubtedly been warned to wash your hands – frequently. Armed with the knowledge that hands should be cleansed often to prevent the spread of germs, you have likely used the washing facilities at public restrooms on some, or perhaps all, of your outings.

But one California mother’s experiment might have you rethinking things. Nichole Ward wanted to see how sanitary the hand dryers are at public restrooms, so she decided to find out for herself. On January 30, Ward posted a stomach turning photo on Facebook and explained the findings of her experiment:

Ok guys.. ready to have your mind blown?!
This here, Is what grew in a Petri dish after just a few days. I stuck the open plate in an enclosed hand dryer of a public bathroom for a total of 3 minutes. Yes 3 only. DO NOT EVER dry your hands in those things again.

This is the several strains of possible pathogenic fungi and bacteria that you’re swirling around your hands, and you think you’re walking out with clean hands. You’re welcome.

⚠this post is simply for awareness, not to instill fear

In the days that have passed, the Facebook post has spread as quickly as a bad case of the flu. According to MSN, though it is unclear if Ward has any scientific expertise, her findings are on par with “real” research that reveals similar findings.  If you have the chance, grab a good old fashioned paper towel to dry your hands, though finding one at a public restroom may be hard given that many establishments have switched over to hand dryers.