All life matters, and for most, pets are considered family, so when a man learned that two dogs were trapped inside of a burning home in New Castle, PA, he didn’t hesitate to rush inside to save them. According to WTAE News, John Sidorchuk was outside on Sunday afternoon when he smelled smoke.

When Sidorchuk checked to see where it was coming from, he saw a neighbor’s house in flames. After learning that there were dogs trapped inside of the structure, he made the decision to help – he told the news agency, “Once I knew there were dogs in the house, the door was locked so I just out of instinct, I kicked the door in.”

According to CBS Pittsburgh, Sidorchuk was able to rescue two collies from the burning house – the dogs’ owner was not at home when the fire broke out. After the dogs were removed from harm’s way, they were kept safe by neighbors until their owner returned. 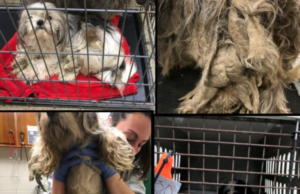 Dog was like a statue after being covered in tar – read the story here.