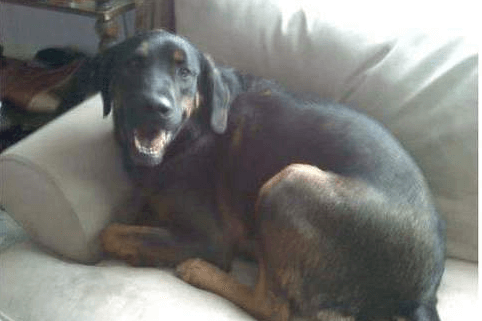 He was a good boy. He was always a very good boy and my big guy is gone. I hope that he will protect over us in the after life,

Bartleby was in his family’s yard when the armed man jumped a fence and shot him in the eye – the faithful dog ran to his family. His owner said, “When he was shot, unfortunately, he ran into the house and wanted to make sure the kids were okay.”

The man who shot the senior dog, who had been with his family since the time that he was adopted from a shelter as a puppy, was killed by the police – his name has not been released.

Even though the man killed the Hewitt family’s beloved dog, they have a forgiving spirit. Liz Hewitt explained:

I don’t want to judge anybody for their actions, you know? Everybody’s living their own lives and it can be very hard,”

Dog in need!  Sad eyes of shepherd who knows that he is in danger – more here.

More: Rescuer, spurned by another woman, stomps and drowns dog – her sentencing here.

This kitty was literally frozen to the ground