When Ally (Lady Gaga) and Jackson Maine (Bradley Cooper) bring a puppy home, director Bradley Cooper, cast his own dog Charlie to play the grown-up version of the pup thus making his movie debut “A Star is Born.”

And the adorable, honey coated curly top melted everyone’s heart. If you have not seen the movie yet, you may just want to “ooh and aah” at Charlie’s face, because there is the hint of a spoiler later on in this article, but the pooch’s photo has been appearing in the popular blogs, and so here we are to further extol his downright cuteness and the important role he played.

In the movie, Ally and Jackson do not have children, but wanted Charlie to be a part of the story. Need I even mention that Cooper loves dogs? Just for background information, the 43-year-old actor had a German short haired pointer named Samson and a Chow retriever named Charlotte. Both pups were rescues. Having Charlie in the movie, named after Cooper’s father, was very important.

Charlie is said to have his own talent agent, and at times only hangs around Cooper when he has treats in his hand, but nevertheless, once Charlie’s parentage was discovered, Twitter followers erupted in the most adorable way.

Let’s not discount Charlie either as just another pretty, four-legged cute face either. During the movie’s gut wrenching climax, Charlie waits outside of the garage for his human – seemingly knowing something was wrong, but had no idea of the tragedy behind that closed door.

“So I just found out Bradley Cooper’s dog in the movie is his real life dog. Someone give that dog an Oscar. I can’t handle this. I’m ruined…”tweeted J@detroitwaves.

People for the Ethical Treatment of Animals (PETA) praised Cooper for using his own dog stating they were “hoping Cooper’s kind decision sets a precedent for all of Hollywood to follow.”

You’re a good boy Charlie – you too Bradley! 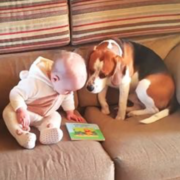 Over 100 dogs removed from deplorable conditions – living in filth and...
Scroll to top