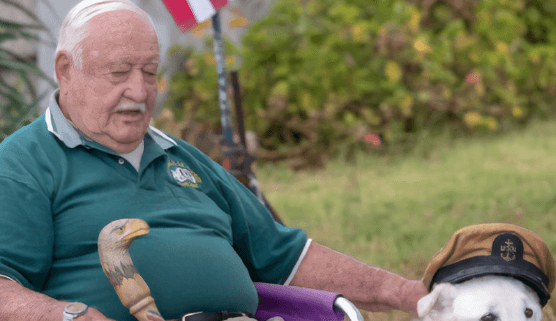 When George Johnson, a United States Navy veteran, learned that Sam, an elderly German shepherd, was in need of a new home because his owner had been deployed, he knew that he had to meet the dog. The timing seemed meant to be – Johnson had just reached out to the German Shepherd Rescue of Orange County to see if they had any older white German shepherds available. He was lonely following the loss of his prior shepherd, Velabit, and he hoped to find a new four-legged friend.

Rescue director Maria Dales told the 93-year-old veteran that she would keep an eye out for a good match and it didn’t take long before she discovered Sam on death row at an animal shelter in Arizona. As soon as Dales told Johnson about Sam’s plight, he indicated that their meeting seemed to be destined. Johnson said, “A Navy man who had to give up his elderly dog to serve his country? It was meant to be. The two of us could grow older together, Sam and me.”

One of the rescue agency’s volunteers made the drive from California to Arizona to pick up Sam. As Johnson surmised, things were meant to be – he described their initial meeting, “when I met him it was love at first sight. Sam sniffed me a little and gave his approval as well.”

Today their pair are inseparable – Johnson described the joy that Sam has brought to his life:

I’ve received a few medals, ribbons, and commendations during my Naval career, but this dog fills my heart more than all of them put together.

Johnson’s life seems complete with the addition of his new companion – he wrote:

I spent 30 years in the Navy and I never forget that Sam’s previous owner was in the Navy defending our country. I am honored to be Sam’s caretaker and companion, and I don’t know what I’d do without him. He’s my best buddy and we share experiences and secrets. I think we’ve added years onto our lives by being together: Sam is now 13, and I’m 93. In dog years, we’re about the same age!

Sam and George’s touching story has been acknowledged by The Petco Foundation – in fact, they are in the running for the organization’s People’s Choice award. If you are touched by their story, you are encouraged to vote to help the rescue group which saved Sam (German Shepherd Rescue of Orange County) secure a $25,000 prize to help continue their good work.

In need: Nobody came for Zeus – will he be saved in time? More here.