A Florida woman who fatally neglected her dog has been sentenced to prison. According to CBS 12 News, 42-year-old Kathryn Portman was convicted of felony animal cruelty on Monday and sentenced to 18 months behind bars, in addition to three years of probation.

The felony charge stemmed from the extreme neglect of a dog named Bruno who had been abandoned in 2015 in a Riviera Beach Sands Motel room after Portman was evicted from the room that she had been renting for nearly a year. By the time that hotel staff discovered the pit bull, he was emaciated and dehydrated.

The dog, who was reported to be sickly, missing hair and covered in fleas, was taken to a veterinarian, but died.  Dr. Kristen Coates, Palm Beach Animal Care and Control staff veterinarian, stated, “The condition of this animal was so severe that even with intervention from a private veterinary hospital, it was too much for the pet to overcome and died.”

Portman has a history of neglecting dogs – however, in the past, the animals were saved before suffering the same dismal fate of Bruno.

Today in the news: FDA issues warning after dozens of dogs sickened by bone treats
Recently in the news: Family dog injured after stepping into cruel trap on popular hiking trail 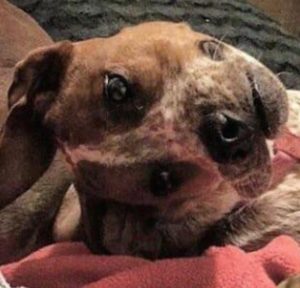 Puppy with fractured skull found on sidewalk
Scroll to top