A Michigan woman has been sentenced to jail for abandoning a severely injured puppy. According to Fox 2 Detroit, 31-year-old Jennifer Visga has been sentenced to 93 days behind bars, ordered to pay $14,000 in restitution, given two years of probation, in addition to being banned from owning pets.

In August, Visga abandoned a severely injured pit bull puppy, dubbed Amari, and left her to suffer and die. The grievously injured pup was discovered by a good Samaritan who found her stumbling out of the woods and onto a busy road on August 15. Visga claimed that she made “a very bad decision” when she decided to leave the five-month-old puppy in the woods to die. 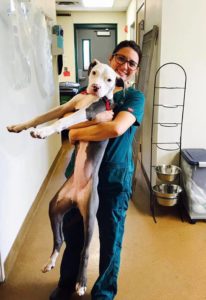 Amari, who is believed to have been injured in a dog fight, was taken under the wing of the A ReJoyceful Animal Rescue and she has been nursed back to health. On October 7, the rescue group updated Facebook followers about the puppy’s remarkable progress:

Amari is growing like a weed! Look at how big this seven-month-old survivor is! She is healing perfectly and loves her foster family! She is still being seen at OVRS for check-ups and will be ready for her vaccinations and spay soon! She says THANK YOU to everyone who has shared, supported and donated to her cause.

After Visga was sentenced, the rescue group expressed joy that justice had been served:

Justice was served today in Amari’s court hearing. We cannot thank our supporters, volunteers and followers enough who pressured the judicial system to provide the maximum sentence in Amari’s hearing.

There is no excuse for animal cruelty and/or abandonment. There are so many rescues, veterinarians and good samaritans who are always available to help in times of difficulty. Amari has touched all of our hearts and we hope she has touched yours too and will continually remind everyone that there is always a choice.

Today was a good day. #ActionForAmari

(Screenshot via Click on Detroit News and image from Facebook)
This week in the news: Man accused of biting dog’s eye out
Recently in the news: Senior dog rescued after being trapped in truck with deceased owner for 8 days