You are here: Home1 / News2 / animal cruelty3 / Wanted: Man who repeatedly stabbed dog and left dog to die by dumpster 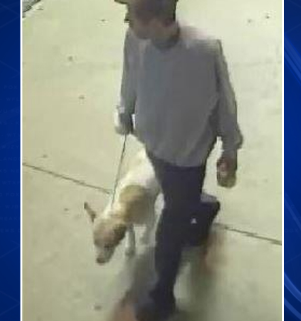 Authorities in Irving, Texas, are searching for a man who is accused of repeatedly stabbing a dog and leaving the dog tied to a dumpster to die. According to WFAA News, surveillance video shows a thin build man, between 40 and 50 years of age, who was seen walking the dog who was found dead on February 26.

The dog had been tied to a blue dumpster outside of a dentist’s office near the 1800 block of West Irving Boulevard. Witnesses who saw the dog’s body have reported that the dog, a three-year-old pit bull mix, was stabbed “dozens of times.”

On Thursday, the Irving Police Department reached out to the public for assistance in the disturbing animal cruelty case. According to the authorities, the man observed on surveillance video is approximately 5’8″ tall and he is either white or Hispanic.

A reward of $5,000 has been offered by the DFW Humane Society for information leading to the arrest and conviction of whoever is responsible.

Anyone with information about this situation is asked to contact the Irving Police Department at (972) 273-1010 (24 hours) and reference case number 17-4507. Additionally, tips may be submitted via email at ipdcrimetips@cityofirving.org. 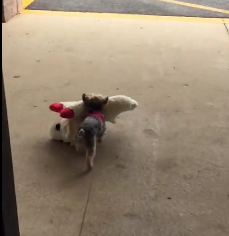 Dumped on side of road unable to use her hind legs, pup keeps ‘smilin...