You are here: Home1 / News2 / animal cruelty3 / Trio pleads no contest for severe neglect of dog kept in basement

A trio has pleaded no contest to charges resulting from the horrific neglect of a small dog who was kept in the basement of a Macomb County, Michigan, home. According to Macomb Daily, Christopher Penn, 36, Sonja Sturdivant, 49, and Demico Knight Jr., could face up to four years behind bars when they are sentenced on April 26.

The felony charge which each individual is facing stemmed from the abysmal treatment of a Shih Tzu mix, named “Elvira,” who was so badly matted that she was nearly unrecognizable when she was found last October. Elvira’s body told a sad story of ongoing neglect – she was blind in one eye, had lost a paw, and had several broken bones in her back legs.

“There was another dog in the house that lived upstairs, that was taken on daily walks, that was treated the way any other dog should be treated. But for some reason – this sweet little dog was left in the basement in its own filth, never taken outside and hardly fed at all and left to wither away.”

After being found and treated, Elvira went to NBS Animal Rescue in Troy for foster care – updated information about her current condition has not been released. The individuals responsible for Elvira’s pitiful condition have been free on personal bonds. 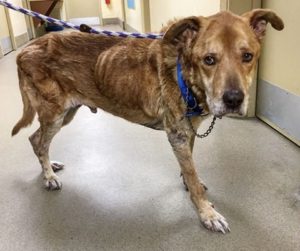 Update on puppy who was left in a Texas mailbox