You are here: Home1 / News2 / animal cruelty3 / Tortured dog still longs for human touch – despite being beaten and...

A tortured dog, mercilessly abused by someone who can only be called a monster, still longs for the kind touch from a human, despite the misery she has been forced to endure. The pit bull, dubbed Trish, was being held at a California animal control agency before being rescued days ago by the Desert Dog Project.

The rescue group stepped forward to help her after learning that she was completely shut down…not reacting to anything, or anyone. While it was evident that Trish had suffered abuse, the extent of that abuse was not made clear until she was out of the animal control facility and examined by a veterinarian.

On Friday, Pat Bonham, with the rescue organization, outlined the heinous abuse Trish suffered when she was beaten and burned with acid:

Her right eye is now GONE and her left eye was partially burned by the acid which left her with only partial shadowy vision in that eye. We noticed the insides of her ears and tips of the inside were badly bleeding and now wondering if the same caustic substance was poured in her ears as well. I am not totally sure but I took her into a patient room to get these pics and she appeared to be Deaf! I called her, whistled, clapped and made noises but she didn’t respond…not even a flinch.

But Bonham noted that Trish still longs for kindness – she wrote:

When she made eye contact she could come to me when I motioned her and she was very sweet. She laid her head on my lap and I gently caressed her. I even got a soft little kiss. 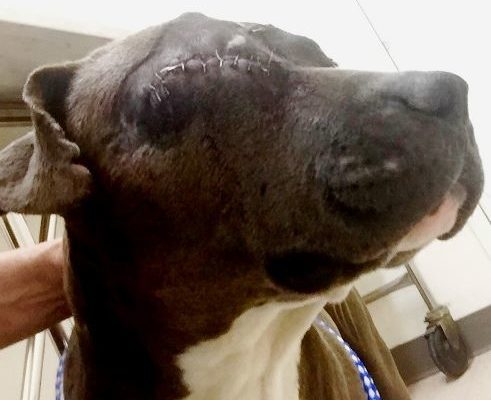 Trish has a long road to recovery ahead of her – both physically and emotionally. She was born to be a friend to humans and she was betrayed in the worst possible way. Finally, this gentle dog is safe and she will receive the care that she so desperately needs and deserves.

Donations to help the non-profit rescue group with Trish’s veterinary expenses can be made via Paypal at DesertDogs@RockandRescue.org

New this week: Abandoned dog died from a broken heart