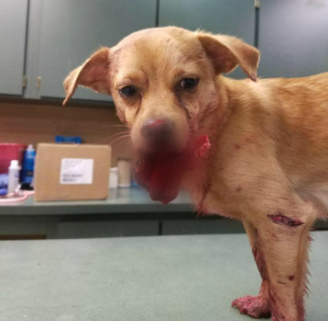 On Monday, the Kentucky-based animal welfare agency, The Arrow Fund, took in a suspected victim of abuse. The non-profit group warned Facebook followers that the images of the pup were graphic.

The post about what is believed to have happened to this abused pup reads:

The former owner was told the heinous injury was allegedly caused by someone who violently kicked this dog in the face. He is headed to BluePearl in Louisville for treatment and will now reside under the care of The Arrow Fund. The surgeon is on standby as is our President/Founder Rebecca Eaves, who will greet him with love.

The Arrow Fund added a subsequent update noting that the 10-month-old puppy is being called “Banjo,” and that he is in “critical” shape.

Donations can be made at TheArrowFund.org and checks may be mailed to The Arrow Fund, P.O.Box 1127, Prospect, Kentucky, 40059.