You are here: Home1 / News2 / animal cruelty3 / Surrendered dog in such poor condition his rescuers cried 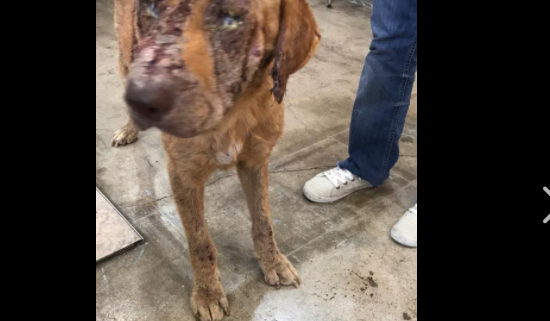 A dog surrendered to a Texas animal shelter was in such poor condition that his rescuers cried. The dog, “Ace,” was taken in at the Harris County Animal Shelter and volunteers for the facility wrote:

The second we saw Ace’s intake photo on petharbor Saturday night, we knew he was in bad shape; little did we know just how bad off he was. We asked our volunteer to get a video of him the next day, and as soon as we read he was an “owner surrender” in such horrific condition, our heart broke into a million pieces.

When Ace was picked up from the shelter, his rescuer broke down in tears over the condition his was in.

Ace has since been taken under the wing of Legends of the Paws Animal Rescue – the agency updated Facebook followers about the dismal condition of their new charge:

Tuesday late afternoon. This poor guy has endured more abuse and neglect then one would think imaginable. It is confirmed that he is only three years old. It is possible that he indeed had acid or other chemical burns. In addition he has dem mange, fungal and bacteria infections. He has had dead skin cleaned off, injections, antibiotics. It is unknown if his eyes can be saved.

It is unthinkable that this dog has been suffering – unimaginable that he was surrendered to a kill facility in this pitiful condition.

Ace is at a veterinary hospital receiving care – his rescuers wrote:

He will be hospitalized for an indeterminate about of time at this point. If you can help Ace’s medical cost it would be greatly appreciated and much needed. The rescue PayPal is , Varnado1@bellsouth.net, please be sure to note the donation for Ace (friends/family).

Keep up with Ace’s recovering at this link to his rescuers’ Facebook page. 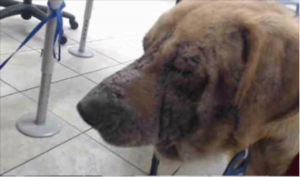 Tired of the cruelty? Find an animal welfare charity to support.

Recently in the news: Police officer rushes to rescue puppy tossed out of car on busy road