Days ago, a mother dog was severely injured by neighboring dogs who were so badly neglected that they literally attempted to eat her through the fence which separated her yard from theirs, reported ABC 30 News. On March 31, the Central California SPCA updated Facebook followers about the disturbing case which left the female dog with a leg so badly mangled that it had to be amputated.

This sweet Pit Bull momma and her puppies were rescued from horrible conditions in west Fresno early this afternoon. The female dog was attacked through the fence by several neighboring dogs that severely wounded her front leg. We rushed her along with four 1 week old puppies to Abby Pet Hospital where their caring staff assessed the injuries. This dog and her puppies are associated with an on-going animal cruelty investigation by our humane officers. The wound covers her entire forearm and is so severe her leg will have to be amputated. 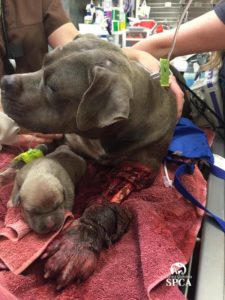 ABC 30 News reported that the dogs responsible for the gruesome attack were neglected and starved, badly enough that they tried to cannibalize the mother dog – the disturbing situation remains under investigation. Five dogs are implicated in the attack on the dog, named “Sophia,” but nobody knows which dog in particular inflicted the damage. Because of the condition of the dogs involved (not Sophia) rescue and rehabilitation is not possible.

“Unfortunately, because of their condition, we will not be able to rehome them or send them anywhere for rehabilitation,”

Sophia will need a safe place to recuperate from her surgery and injuries – the shelter issued a request for a local foster home:

Donations to help cover the surgery can be made at this link to the shelter’s Wellness Fund.
(Images via CCSPCA Facebook page)
A heartwarming rescue – reporter stops broadcasting to save a drowning dog. Read more here. 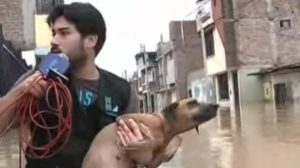