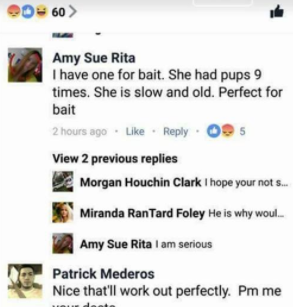 A Facebook user has caused an uproar on social media because of a post which indicates that she intends to sell her senior dog to someone as “bait” to a dog fighter. The user, going by the name Amy Sue Rita, wrote:

I have one for bait. She had pups 9 times. She is slow and old. Perfect for bait.

Suffice to say, the callous statement has created a great deal of outrage. The Facebook user’s profile states that she works at the “Hate Factory” and that she lives in Rochford (United Kingdom).

Another Facebook user has stated that the bizarre and heartless comment is part of a hate challenge – something people do to see how much “hate” they can generate. 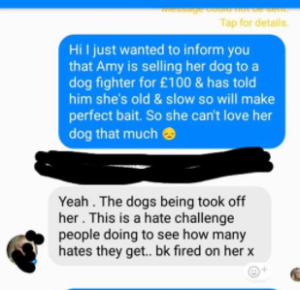 Comments left by the Facebook user on Saturday include, “Yeah free country , but I can’t sell a damn dog?” With angry responses stating that you can, but not to be tortured and killed by a dog fighter. The Facebook user going by Amy Rita responds that the dog is “her property.”

The actual fate of the dog is unknown – there are reports that the local authorities are investigating the situation.

White wolf shot and left to die in Yellowstone