Social media lit up in outrage after five kittens were saved from a deadly house fire in Conway, Arkansas, only to be euthanized shortly after they were taken to the local animal shelter. According to The Cabin, no people died in Thursday’s blaze, but seven pets perished.

After the fire, Capt. Rick Powell posted an image of the rescued kittens to Facebook – the photo’s caption reads:

These little guys lost their mom today in a house fire. We gave them oxygen therapy And I believe most will make it. They will have to bottle fed. They are at Conway animal shelter just in case someone is looking for a kitten.

One of the kittens died on the drive to the shelter. After exhausting her options for care for the others, the shelter director made the decision she thought was best under the circumstances.

Many people question the official response and believe that the kittens were put down because the shelter is not equipped to handle newborns.

Want to stay current on animal-related stories? Please be sure to subscribe! 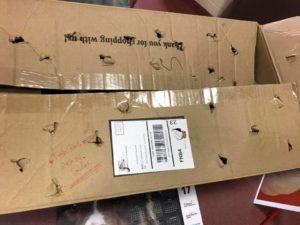