You are here: Home1 / News2 / animal cruelty3 / ‘Skin and bones’ dog abandoned in an alley

Early last week, an emaciated dog, described as nothing more than “skin and bones,” was abandoned in a north Wichita, Kansas, alley. According to KSN News, the young pit bull was dumped under cover of darkness in an alley in the 1800 block of North Arkansas.

A resident saw a 1990s model blue minivan dump something out of their vehicle and went outside to investigate. The good Samaritan, identified as Vinnie Currie, discovered that it was a severely malnourished young pit bull, barely clinging to life, who had been abandoned.

The rescue agency, Beauties and Beasts, Inc., was contacted to assist with the badly neglected dog, who has since been named Aadya, meaning “Goddess of the 5 elements.” According to the rescue group, a veterinary exam revealed that Aadya had been subjected to long-term neglect and abuse. Her paws were burned from urine and her overgrown toenails were filled with feces – signs that she had been confined in a cage.

An x-ray also revealed that the young dog had resorted to eating a corn cob in a desperate attempt to survive – the cob had created a blockage which was threatening Aadya’s life. Despite her frail state of health, Aadya had to undergo emergency surgery to remove the blockage. Amazingly, despite the odds stacked against her, she survived. 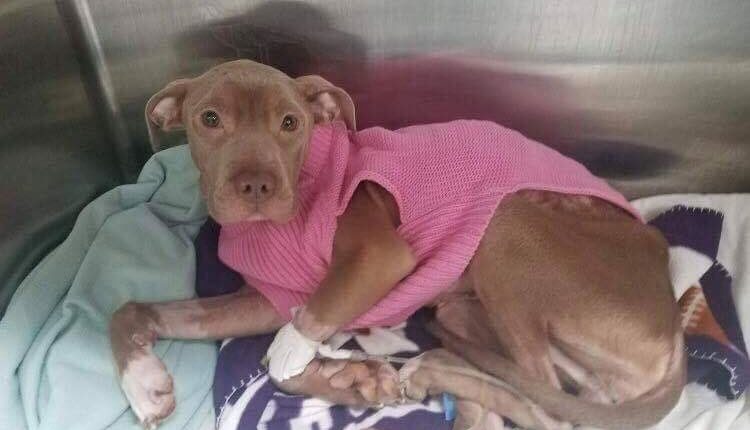 Though the road to recovery will be long, the young dog is making positive strides in the right direction. On Monday, the rescue group commented on Aadya’s progress:

This sweet girl is making great strides- she is doing SO much better today! Miss Aadya is now in a foster home, getting lots of love and attention. She will never be neglected again. Snuggling up in her little sweater, and with her new foster family. We are so proud of you, and can’t wait to see how beautiful your second chance at life will be.

The authorities are continuing to investigate this case of animal cruelty. Anyone with information is asked to contact Crime Stoppers at (316) 267-2111 or WPD animal services at (316) 350-3360.

A fundraiser for the ongoing veterinary care for this young dog can be found here.

Stray dog shows up at wedding – refuses to leave

Boarding facility and owner charged after death of dog

Shelter’s longest resident is losing all hope
Scroll to top