You are here: Home1 / News2 / animal cruelty3 / Shelter takes in severely burned dog who was set on fire

An animal shelter in Summerville, South Carolina, has taken a severely burned dog into its care. According to Tuesday’s ABC News 4, an animal control officer picked up the grievously wounded dog after he was discovered wandering in a woman’s yard off of Quaker Road in St. George.

The dog, a mixed-breed terrier, has extensive burn wounds across his body – Frances R. Willis SPCA Executive Director Kim Almstead told the Journal Scene that the emaciated dog, “reeked of gasoline and kerosene.”

The young dog, estimated to be just one to two years of age, is receiving round-the-clock care to help him survive the extensive burning. His fate remains uncertain because of his injuries, Almstead stated “We have to go through the first 24 hours because…he is already in shock.”

Anyone with information about this cruelty case is asked to call Animal Control at 843-832-0015. Donations to help with this dog’s care can be made to the shelter’s website here. 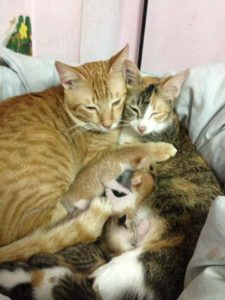 Senior retriever dumped at shelter when owner kept ‘tripping over’...
Scroll to top