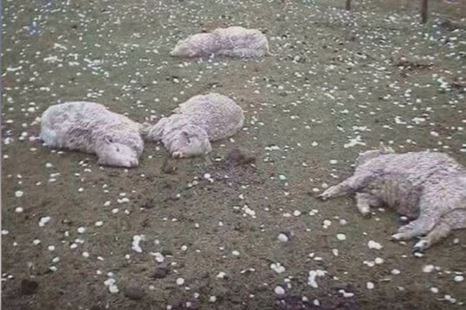 A freak, violent hail storm struck Spain one week ago and the huge pellets of ice left a path of destruction. According to the Mirror, not only were cars ruined by the pelting hail, but several sheep who had the misfortune of being in harm’s way, perished as well.

Video of the intense storm was captured and it vividly shows the devasting impact of the hail – when the ice pummels the ground, it literally explodes.

This week, the Sun reported that no human casualties have been reported as a result of the violent storm. According to Weather.com, hail forms inside of severe thunderstorms – the ice balls which form can weigh well over a pound and grow in size as big as a baseball.

Nextshark reported that Japan was hit by an “epic” hail storm on July 18 which destroyed cars and street lamps – the storm apparently hit without warning.

Note: Though multiple media outlets have reported that this footage is from a freak storm in Spain, some individuals have claimed it was actually taken in Mexico earlier this summer. Wherever it happened, it was violent and deadly.

Man stabs girlfriend’s dog for ‘taking her side’ during a...
Scroll to top