You are here: Home1 / News2 / Dogs3 / Rescued dog undergoes genitalia removal to save his life 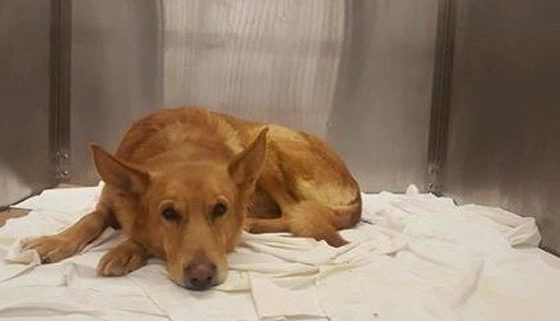 One week ago, a German shepherd mix was left at the Chicago Animal Care and Control facility by the only family that he had ever known. The dog, Bishop, was in extreme pain and he was at risk of being put down.

Bishop’s life was spared when Woof Gang Rescue stepped forward to pull him from the animal control agency. According to the Journal Times, Bishop had severely painful bladder stones and he was in distress. The news got worse for the suffering dog – a veterinarian who treated the rescued dog told Jodie Hoffmann-Ruffalo, the rescue group’s executive director, that efforts to remove the stones were unsuccessful.

The rescue group was left with two options…both extreme. One option was to humanely euthanize the seven-year-old dog and end his suffering. The other was a surgery to remove his penis and reroute his urine flow…making him pee like a female dog.

Option two was selected and Bishop successfully underwent the expensive surgery – he no longer has his penis and he has a new name, Bishy. Some people have criticized the rescue group for opting for an expensive surgery to save “just one dog,” but Hoffmann-Ruffalo thinks that Bishy is worth it.

Click here to find the fundraiser to help pay for Bishy’s life-saving surgery.

New this week: Drunk man accused of blowing off dog’s paw with a firecracker