A 12-week-old puppy is alive today, despite swallowing an eight-inch long knife. The amazing, albeit bizarre, situation was recounted in a press release from the People’s Dispensary for Sick Animals (PDSA).

According to the agency, the Staffordshire Bull Terrier, named “Macie,” somehow ingested a kitchen knife without her owner’s knowledge. Owner Irene Paisley, of Glasgow, was alerted to a problem with Macie began strange noises. Paisley described the situation:

“Macie was making a squeaking sound – I thought she’d swallowed part of a toy. Then she was sick, but there was no sign of a toy and she started choking.”

Paisley was rightfully concerned and rushed her ailing pup to PDSA’s emergency out-of-hours provider Vets Now for care. The frightening situation was made clear after x-rays were taken of Macie’s abdomen. PDSA described what was found:

The knife handle had passed through Macie’s stomach and into her intestines, while the tip of the knife was still in her gullet. 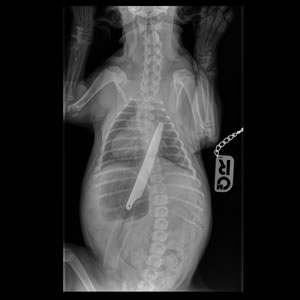 Macie beat the odds – following emergency surgery to remove the kitchen knife, the puppy was showing signs of her pre-injury self. PDSA Vet, Emily Ronald, said:

“I’ve never seen an x-ray like Macie’s. She was extremely lucky to survive. Her saving grace was that she swallowed the handle-end first – the blade-end would undoubtedly have pierced her organs, likely causing fatal injuries. The morning after surgery, she was bouncing all over the place as if nothing had happened. Macie has been back for frequent check-ups over the past two weeks and we’re pleased she’s recovering and healing well.”

“Although she’s only young, Macie is already a big part of the family. She brings us so much joy and happiness, and means the world to the children. Without PDSA, she wouldn’t have received her life-saving treatment and wouldn’t be here today.”

“Macie is just one of the lucky pets to benefit from PDSA’s emergency service which has received generous funding from players of People’s Postcode Lottery. Thanks to their support we’re able to provide thousands of life-saving treatments across the UK.”