You are here: Home1 / News2 / animal cruelty3 / Puppy left inside of hot car while man shopped will be returned to her...

The man who decided to leave his young puppy inside of a parked car, on a day when the temperature was 99-degrees outside, will be allowed to retain custody of his pet. According to WSBTV News, despite the cruel nature of the incident, 20-year-old Chandler Allen Bulle is being allowed to keep his pet. 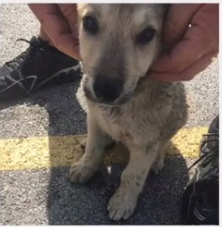 In a statement to KVUE News, Detective Craig Struble expressed disappointment with the judge’s decision to return the puppy, whose name is Annabelle:

The puppy, a German shepherd mix, had been left for 30 minutes inside of Bulle’s car, which was parked outside of a Walmart store in Manor, Texas. Without police intervention, the puppy would have likely died from heat stroke.

Though the judge has decided that Bulle can retain custody, the man is still facing a charge of animal cruelty for his poor decision last weekend.

Original story about this situation here.