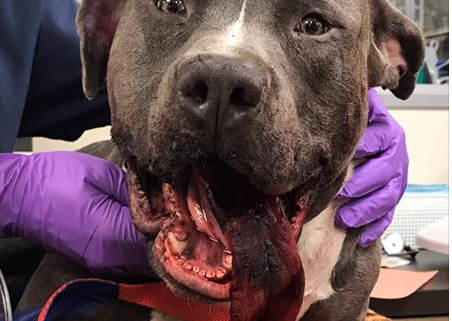 On Monday, a puppy in Dublin, California, managed to escape from a brutal beating which left her with a fractured jaw, missing tooth and extensive bruising. The nine-month-old pit bull puppy, “Allie,” is currently in protective custody with Alameda County Sheriff’s Animal Services.

In a release, the Alameda County Sheriff’s Office recounted what happened:

The investigation revealed Allie was the victim of animal abuse. She was repeatedly beaten with a weapon but was able to get away and survive. Concerned citizens found her in serious condition and brought her to an emergency veterinary hospital in the Tri-Valley.

Deputies were able to locate the suspect and he was arrested for felony animal cruelty charges and booked into Santa Rita Jail. The alleged dog abuser’s identity has not yet been released.

Allie is out of surgery and in recovery. It was a very long procedure but she did well. She is resting comfortably and rolling over for belly rubs (Dr’s words). It’s likely she will stay at the vet for the next day or two under observation.

The ACSO stated, “Donations to help with Allie’s treatment and recovery would be appreciated​ and can be made by visiting TVAR.ORG and putting “ALLIE” in the notes section of your donation.”