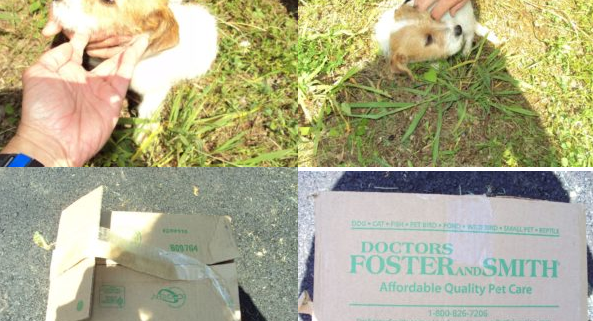 On June 7, an abandoned puppy was discovered inside of a cardboard box which had been sealed with tape. According to Georgia’s Dalton Police Department, the female puppy was found near the intersection of Needham Drive and Kammi Street by kids who called the authorities for help.

In a press release, the police department provided details about the manner in which the puppy was found, and her current condition:

The puppy was sealed in a box with markings from Doctors Foster And Smith Affordable Quality Pet Care. The puppy is a female white and black dog, most likely a Jack Russell terrier. She appears to be approximately 8 weeks old. Despite being sealed in a box with temperatures in the 80’s, the puppy was healthy and playful once she was freed. The dog was taken by Animal Control and turned over to a local rescue organization. She is safe.

Officers are hoping that someone will recognize the puppy and know who owned her or possibly know who owned the litter from which she came. Anyone with information on this incident is asked to please contact Officer Serena Martin at 706-278-9085, dial 9 and enter extension 240 or email smartin@cityofdalton-ga.gov.