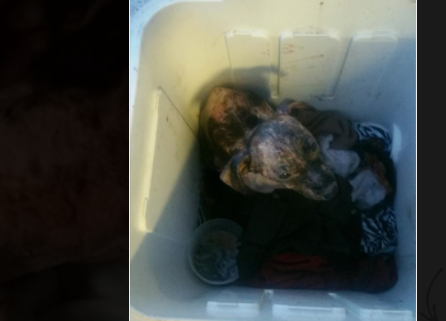 Someone abandoned a sickly puppy – leaving her to die alone in a Styrofoam container in Miami, Florida. The details surrounding how the pup, dubbed “Harley,” was found are recounted on a fundraiser which has been set up to help cover her veterinary expenses.

Harley was found in an alleyway tucked inside a cooler that was filthy inside. Harley was left next to a garbage bin, discarded like trash. Harley had no water and there was only some rotting food sitting inside the cooler next to her. Harley was trembling and clearly in  distress. Whoever had Harley before we rescued her severely neglected her & had no regard for her life. Harley is completely terrified and her skin is in horrific condition. She has several open sores throughout her body and 90% of her coat has fallen off! She has to be coaxed to eat because of how fearful she is at this moment.

Harley was rescued by Miami Beach police officers who were summoned by concerned citizens. Currently, the badly neglected puppy is recuperating from her many maladies at a veterinary hospital. Undoubtedly, her road to recovery, both physically and emotionally, will be long.

Find the fundraiser (which includes more details and images) for Harley here.

Sick of the abuse? Find an animal welfare charity to support!

Recently in the news: Baby elephants ripped away from family and taken to zoos