You are here: Home1 / News2 / animal cruelty3 / Pup, blasted with a shotgun, recovering in rescue

A puppy, just six months of age, is lucky to be alive after someone shot him with a shotgun. The German shepherd, dubbed “Rafael,” was rescued after he crawled out from beneath someone’s house.

Today, Rafael is recovering with Janice Wolf at the Rocky Ridge Refuge in Arkansas. On September 25, Wolf updated Facebook followers about the puppy’s tremendous injuries, and how he is believed to have been hurt:

UPDATE on injured pup. WARNING: GRAPHIC PHOTOS!
Folks, while I was correct about this being a firearm injury, it was a bit different than I first thought. I have discussed with a gun expert and with the x-ray we know now that this 6 month old baby was the victim of a shotgun blast from very close range, from the back/side!

He had his head turned looking at the shooter and a pellet destroyed his eye. It is truly a miracle that none of the buckshot hit vital structures throughout his neck and head. Sadly, we also know that this happened more than a few days ago, based on the amount of granulation tissue present.

The damage to Rafael’s eye is so great that he will need to have the eye surgically removed…but not until he is healthier. This grievously injured young dog is now safely out of harm’s way and his future is once again bright. 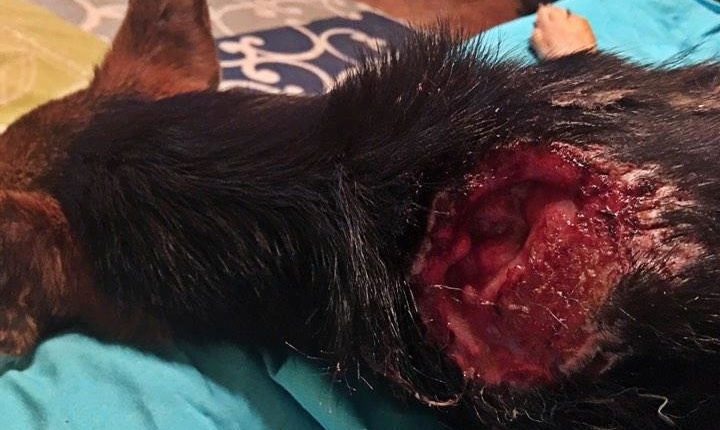 Recently in the news: Heroes rescue puppy buried in mound of trash

This amazing trainer has rescued and adopted over 78 dogs!

‘Sub-human’ tried to drown 3 puppies and 3 kittens only a few days...
Scroll to top