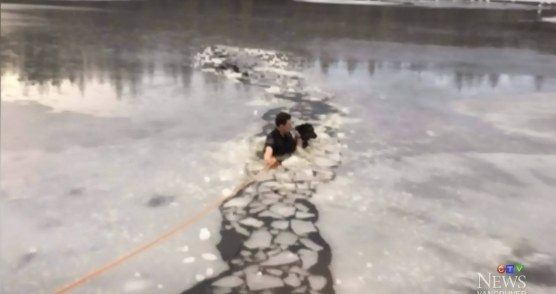 A police officer in Vancouver, Canada, went above and beyond the call of duty when he responded to a call about a dog struggling in an ice-covered lake, and went in to retrieve the pup himself. According to Saturday’s CTV News. Constable Peter Colenutt was alerted to the concerning situation at  Lost Lagoon in Stanley Park on Friday afternoon.

The dog had chased a ball onto the thin ice and fell through – he was unable to get back to shore on his own. Const. Colenutt did not wait for rescuers in wet suits or boats to arrive – instead, he shed a portion of his uniform and jumped into the frigid water, and then swam out to the dog. 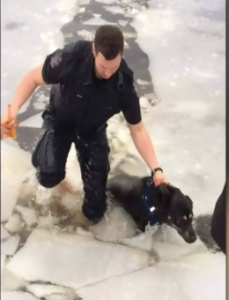 With the help of a rope, the heroic officer was able to pull the struggling dog back to shore. Aside from being cold, both the dog, and his rescuer, were unharmed. This wasn’t Const. Colenutt first water rescue – back in 2016, he and another officer saved a distressed swimmer who was 100 meters from shore.