According to Thursday’s WPBF News, the police have found and arrested a Florida man who is accused of shattering a puppy’s leg when he threw her over a tall fence. The puppy-abuser, identified as 34-year-old Jorge Samuel Hernandez, was arrested Okeechobee County Sheriff’s Deputies for the crime which left a six-month-old puppy with a badly fractured leg. 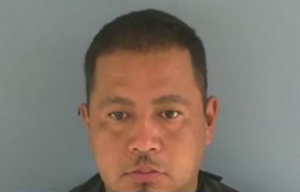 The despicable act of cruelty was captured on video surveillance – the footage shows Hernandez picking up the puppy out of the back of a truck and hurling her over a 7-foot fence at the animal control agency in Okeechobee. The puppy, dubbed “Jenny,” had to undergo surgery to repair the fractured bone in her leg.

Hernandez explained to the deputies that the puppy had followed his dog home – he claims that he threw her over the animal control fence because he feared that she would hurt children in the park which is near his home.

Jenny is recuperating from her injury in a foster home – she is described as “very happy.”

Beyond heartbreaking: 16-year-old senior shivers in fear at Miami shelter