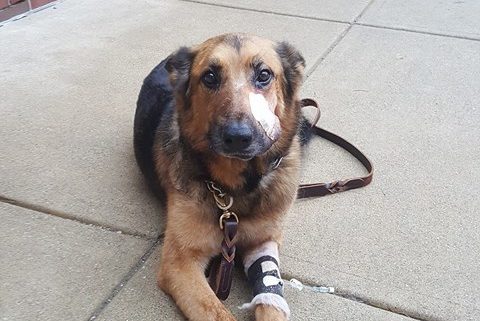 According to ABC 7 News, a police canine who was shot in the face last week while trying to apprehend a suspect in Gary, Indiana, is going home. Blade, a six-year-old Dutch shepherd, suffered a broken jaw when the shooter, identified as 18-year-old Marquis Thomas, started firing at the dog and officer last Wednesday.

Thomas died on Thursday from his injuries when the officer who had been fired upon returned fire, reported the Chicago Tribune. On January 20, the Lake County K9 Association updated Facebook followers about the injured canine:

Blade is continuing to recover from the surgery on his jaw. Once again, Purdue University Lafayette has been outstanding in taking car of him. His jaw surgery went well. It was a complicated surgery and they did it well. He is a strong dog and has shown extreme resilience. He has started eating on his own again and we will see what tomorrow brings. 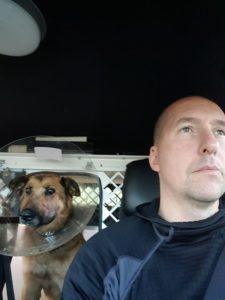 On January 21, a photo, of Blade going home, was posted to the page, along with an update:

Well, this picture should tell you something. It tells you Blade has been released from the hospital and is headed home. His working days are probably over, but he will always serve as my protector. Thank you everyone for standing by us…..Chris Vukin.

Blade, who worked with the department’s gang unit for four years, is being hailed a hero for his actions on the day of the shooting. It has been reported that he went for the shooter’s gun on the day of the incident and diverted the weapon from shooting the officer.