A young dog, just one year of age, was recently dropped off at a Kentucky animal shelter with instructions from his owner to have him euthanized. The dog, named “Clyde,” had a huge tumor on his body – six pounds in fact. According to veterinarians who examined Clyde, the tumor had likely been growing over half of his life, reported WLWT News.

Thanks to HART Animal Rescue, Clyde is getting a second chance at life – the rescue group picked Clyde up from the Gallatin County Animal Shelter where he had been given a death sentence by his prior owner. Shari Wyenandt, with HART, told WLWT the callous way his family had surrendered him:

(they) literally dropped off, instructed to euthanize, then he turned away, turned around and walked away.

Fortunately, the shelter staff wanted more for this cast-aside dog – they searched for a rescue agency to take him in and HART Animal Rescue answered the call. Clyde has already undergone surgery to remove the massive tumor and when he has recuperated, he will be made available for adoption. 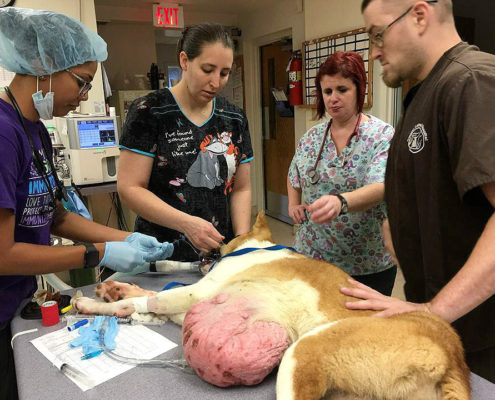 Donations for Clyde’s surgery can be made here.