On Tuesday, an emaciated dog was owner surrendered to Ho-Bo Care Boxer Rescue in Colorado. According to the rescue agency, the dog, dubbed “Spartan,” was in such pitiful condition when he was surrendered that he was near death – the group stated, “The owner never sought vet care and now he is barely hanging on.”

The skeletal dog is being forced fed and given fluids – the rescue agency stated that he is being taken to get an ultrasound to see if there is an underlying medical issue at play. Blood work has shown no issues. On Thursday, the rescue agency updated Facebook followers about Spartan’s current condition:

Spartan was able to keep some food down last night and this morning, but is still not eating on his own. We are still waiting to hear whether he’s recommended to have an ultrasound.

According to 9 News, the local authorities are investigating the situation to determine if charges are warranted. Donations to help the rescue group cover Spartan’s ongoing veterinary needs can be made at this link. 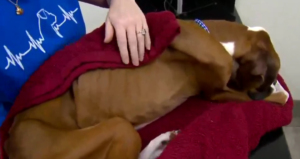