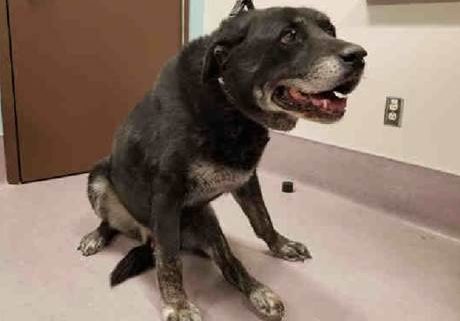 How could you? How could you bring your elderly, arthritic dog who has a hard time walking, into a busy, high traffic animal control agency where he might be put down? How could you decide to move and leave your family member behind?

These questions and more are plaguing animal lovers who are hoping against hope that 13-year-old “Blacky” will be saved before the unthinkable happens. Blacky, a senior Labrador retriever mix, was left by his family at the Los Angeles County Animal Care and Control.

According to staff, the following information is known about this senior dog:

His owners stated he was kept primarily outdoors, is partially housebroken, is disinterested in small children, good in the car and on a leash, does not try to escape, and is low energy. It was not known how he is with other animals. He was surrendered because the owner was moving. “Blacky” does have trouble walking and his owners stated he has bad arthritis.

He is available now on a health waiver and it is recommended that the adopter take him to the vet for bloodwork and X-rays (pelvic with stifles).

Blacky has until the end of day Friday (October 6) to be saved or his life will end at this animal control agency.

Recently in the news: Someone abandoned an ailing puppy in a Styrofoam container in Miami Beach

Will you help this blind, senior dog find a family?

Ten-year-old girl revels in the attention after shooting her first black be...
Scroll to top