You are here: Home1 / News2 / Dogs3 / Owner angry after shelter puts dog down 30 minutes after arrival

A Las Vegas dog owner is angry that an animal shelter put her dog down just 30 minutes after the dog’s arrival. According to Wednesday’s KTNV News, Michelle Smith’s dog, “Trouble,” was taken to the Animal Foundation after he escaped from her yard and was struck by a car.

Just 30 minutes after an animal control officer brought Trouble to the facility, shelter staff decided that the dog was in pain and suffering and that he needed to be put down. Smith questions their decision because she was told that her dog’s leg was broken but she saw a photo of him and he did not appear to be suffering from a broken leg. Smith told KTNV News, “They kept using the word suffering, suffering, suffering and I’m looking at this photo like my dog is standing on all four legs like my dog is fine!”

The Animal Foundation, which operates the Lied Animal Shelter, told the news agency that euthanizing Trouble was “not an easy decision.” Smith is angry that her dog lost his life because of a broken leg, she stated, “Is my dog going to die from a broken leg? Are you freaking kidding me?”

Trouble did not have a microchip or any identifying tags.

Feel free to weigh in on this tragic situation below. Remember, it is important for your pets to not only have a microchip with current contact information, but a collar with identification tags which can be critical in cases of emergencies like this. 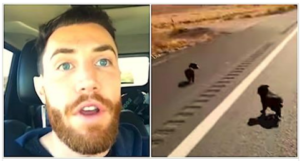 NY man arrested for strangling, beating dog so badly she had to be euthaniz...
Scroll to top