You are here: Home1 / News2 / Dogs3 / Officer comes to the rescue of dog abandoned for days in crate 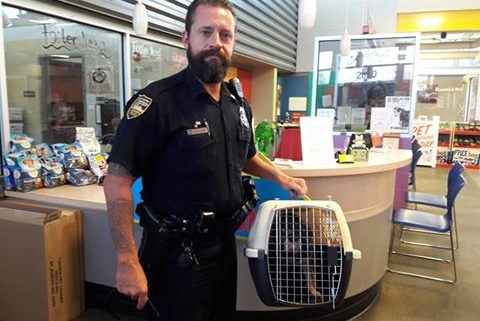 Someone abandoned a small dog in a crate alongside a busy roadway in Jacksonville, Florida. According to the Jacksonville Sheriff’s Office, it is believed that the dog had been left inside of the crate for days before being discovered and rescued.

On Tuesday, the rescue effort was recounted on the Facebook page for the sheriff’s office:

JSO Officer Lind to the RESCUE! Someone left this little dog on the side of a busy road in a crate with no food or water. Apparently the little guy had been there for a few days as he was so very scared, and hungry. A good Samaritan called JSO, and Officer Lind got the call, and rescued this little guy.

Thanks to the good Samaritan and the responsive sheriff’s deputy, the abandoned dog is now safe at the local animal protective services facility. According to the sheriff’s office, he is “getting the best care,” and will be in a safe forever place soon.