You are here: Home1 / News2 / Heartwarming3 / Nurturing dogs helped give this ailing calf the will to live

A Scottish Highland calf, born on a North Carolina ranch with serious ailments that threatened to steal his life, found the will to survive thanks to nurturing dogs who took provided “mothering duties,” as well as love and acceptance. The calf, lovingly dubbed “Baby James,” has encountered serious health issues from the time of his birth, but his care providers, and the nurturing dogs, have seen him through the worst of times.

According to the Happy Hens and Highlands Farm, Baby James was born on a mountain in the midst of a horrible rainstorm. Because of his large size, it is believed that complications during his birth left him oxygen deprived, and suffering from what is known as “dummy calf syndrome.” 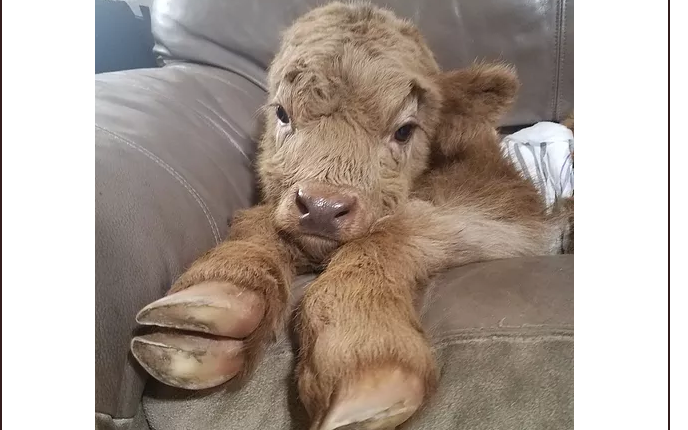 Baby James wasn’t going to survive if left out in the cold, so he was brought inside and provided with round-the-clock care and bottle feedings. His immune system was compromised and around one month of age, it was discovered that the calf’s naval had not properly closed – a short time later, a life-threatening infection, impacting the calf’s umbilical cord and organs, was found. The infection was so severe the Baby James’ life was in jeopardy.

Baby James’ veterinarian was not optimistic, but nobody wanted to give up on the sweet calf who had already survived so much. Thanks to an innovative treatment, Baby James miraculously survived and he is enjoying a carefree life with his canine pals.

(Note: According to Happy Hens and Highlands, their cows are NOT raised for meat)

New today: Reward offered after family’s dog beaten to death with a bat