You are here: Home1 / News2 / Dogs3 / Death row dogs4 / Nightmare continues for Kato and Kleo and their owner in Hamden, Conne...

One of the greatest travesties of justice has been occurring in Hamden, Connecticut for the past 5 years. Two Rottweilers; Kato and Kleo have been incarcerated there since October 2012. Pleas for their lives have been widespread via a petition to Connecticut Governor Dannel Malloy, pleas to the Mayor of Hamden, Connecticut as well as appeals filed in the appellate court on their behalf. The outcome; Kato and Kleo still sit in a cage 23 hour a day, 7 days a week.

Their owner, Kim Miller has spent upwards of $50, 000 in court fees and attorneys fighting to bring her dogs home.

The case against Kato and Kleo started in October of 2012. According to Kim Miller, she was working in her yard when an unknown person whose description she did not get, opened the gate and let the two dogs out.

What happened next remains sketchy with differing opinions and statements by those present.  Cynthia Reed, a neighbor reported hearing her granddaughter screaming and ran outside to see the two dogs barking at the child. She began kicking and hitting the dogs and was joined by other neighbors who struck the dogs with baseball bats.

According to Kim Miller, the dogs attacked only because they were being attacked and until then have never bitten or attacked anyone.  She further claims her side of the story was never taken.

Kato and Kleo were seized by the Hamden County Animal Control and quarantined for 14 days which has since turned into almost five years.

Unfortunately, the Connecticut Department of Agriculture wants the dogs killed.

On a June 23, 2017, a posting on the Save Kato and Kleo Facebook page, the Connecticut Department of Agriculture and the Town of Camden continue to file motions to delay court. No consideration has been given to the fact that the dogs have been incarcerated for over four years, an act of extreme cruelty in itself.

According to vets and kennel assistants who have spent time with the two dogs, all agree that both dogs are absolutely wonderful. Although they have been incarcerated for almost five years in a high stress environment, they are still as sweet and responsive as the day they first arrived.

Since the incident first occurred in October of 2012, the story of Kato and Kleo has been told and retold multiple times via newspaper, television news reporting, pleas to governors, presidents, senators, humane societies and television personalities who claim to be advocates for animals. Yet, the cry goes unheard and Kato and Kleo get another year older in their prison. Why won’t someone in authority take a stand for these two dogs?

It is the humane thing to do. 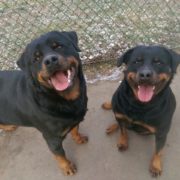 Authorities search for person who forced dog to stand on his hind legs until...
Scroll to top