The New York Appellate Division for the First Judicial Department, in a unanimous decision, affirmed on Thursday the corporate lawyer who went to jail for beating his girlfriend’s little dog to death has been disbarred. Anthony Pastor, 46, was convicted of aggravated cruelty to animals, a class E felony, and overdriving, torturing and injuring animals – a class A misdemeanor. On May 31, 2017, Pastor was sentenced to two years in prison on the felony  and one year on the misdemeanor count – the sentences running concurrently. In addition he is required to register as an animal abuser and has been banned for ten years from owning or caring for any animals.

According to the New York Daily News,  Pastor was charged with killing Snoopy — Taly Russell’s four- year-old poodle. Taly stated she had been at Pastor’s apartment and when she awoke in the morning, her dog was dead. 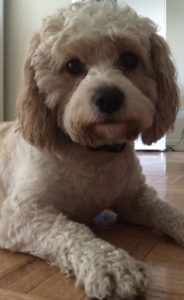 “I looked down and there was Snoopy — stiff, not moving — her eyes were sunken into her head, and there were feces behind her. Then I went closer, and I touched her and she was cold and hard,” Russell, 45, testified during the week long trial.

A necropsy revealed the dog died from massive internal bleeding, 9 broken ribs and a “pulverized kidney.”

Assistant District Attorney Tanisha Palvia argued that Pastor flew into a rage after Snoopy had an accident on the carpet.

“This small, fluffy dog was beaten to death,” the prosecutor said. “Think about the kind of person who would cause this kind of injury to a defenseless animal.”

Justice Robert Mandelbaum said  Pastor’s repeated blows to the dog “showed almost incomprehensible violence, and malice,” that the dog was in “excruciating pain” up until she lost consciousness while Pastor “sat down at his computer in the most cold blooded manner, and went to work, knowing that the dog lay dying,…on the floor behind him.”

And all of this happened because Snoopy, the fluffy little adorable and defenseless poodle, urinated on the floor of Pastor’s apartment.