You are here: Home1 / News2 / Dogs3 / Necropsy results released on pug who died during grooming session

A five-year-old pug, named “Ollie,” recently died during a grooming session which was taking place at a Petco in Middletown, Rhode Island. According to the dog’s owner, Ollie had no known health issues which might have led to his untimely demise.

Immediately after Ollie’s death, Petco stated that they would be looking into the dog’s death to see if there was anything untoward which had taken place.

On Friday, the Pet Rescue Report received an email from a Petco Communication Team representative. The following is the company’s updated statement about the results of Ollie’s necropsy:

“Based on the preliminary autopsy results from Tufts Cummings School of Veterinary Medicine, we can confirm that there was no evidence of trauma to Ollie’s head or neck. As is the case with all Pugs, Ollie had what is called brachycephalic syndrome. The results show that his soft palate was much longer than normal, which causes blockage of the airway and makes it difficult to breathe. As a result of this information, we do not believe the actions of the pet stylist who trimmed Ollie’s nails, nor any other store partners were responsible for his untimely passing. Our thoughts are with Ollie’s family during this difficult time.”

Prior article about Ollie here.

In the news Friday: Cruelty investigation launched after dog found with rubber band around snout. 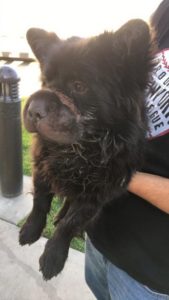 Suffering dog, with snout bound in a rubber band, found in California

Family moved, bonded dogs left behind – now they may die
Scroll to top