A mountain lion and her three kittens were put down by wildlife officials in Montana after two pet dogs were killed by the wild animal. According to NBC Montana, a 35-pound dog was killed by the mountain lion on Sunday on the outskirts of Missoula; a second dog was later reported deceased.

Fish, Wildlife and Parks wildlife management specialist James Jonkel acknowledged that the decision to kill the lions was made because domesticated pets had been killed, but admitted that culling the mountain lions was “unfortunate.”  ABC Montana News reported that mountain lions are difficult to relocate to other areas and they become dangerous when they start to prey on pets. 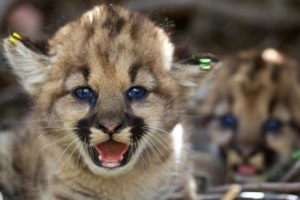 The adult lion’s kittens were killed because wildlife officials felt that they would not survive without their mother and they believed that zoos would not be interested in taking them in. Local school officials assured parents that students in the area were not in danger from the mountain lions.