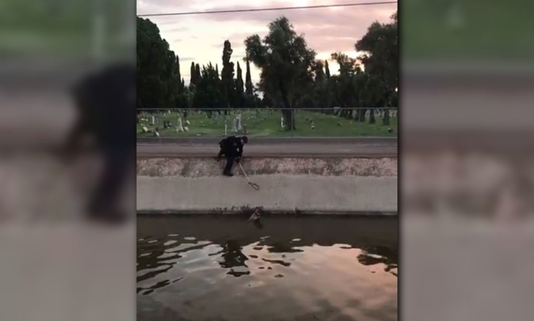 In Mesa, Arizona, a police officer rescued a dog who leaped into a canal when he spotted some ducks swimming and decided it was his canine prerogative to chase them. The dog’s owner, John, a Vietnam War veteran suffering from Post Traumatic Stress Disorder (PTSD), rushed down the steps to save his dog, but within moments he lost sight of Sparky as the pup drifted farther downstream. John thought his dog was lost forever and drowned.

According to the City of Mesa Police Department’s Facebook page, an observant citizen spotted Sparky swimming back and forth in a panic about 30 minutes later and called the police. Officer Goodrich arrived at the scene and was able to pull Sparky out with the use of a catch pole. Concerned for the dog’s health and safety, Sparky was transported to a nearby animal hospital. Because he was microchipped, his owner John was contacted and two were soon reunited.

Ten years ago, John adopted Sparky after the dog’s original owner passed away from cancer, and as John stated,

“It was actually Sparky ‘who took me in.’ Sparky is my guy. He’s my mental health. If I had sight of him in that canal, it would have been ‘both’ of us in there.”

Today, Sparky is recuperating from his scary experience. When asked how it feels to have a second chance with Sparky,

“I can’t thank everyone enough. It’s all wonderful. It’s a miracle,” stated John.

Thanks to the concerned citizen, VCA Animal Referral and Emergency Center of Arizona, and great efforts performed by Officer Goodrich, the Mesa Police Department is honored to be part of bringing Sparky and his family together again.

Stop by the Facebook page of the City of Mesa Police Department and thank the officer for being a great guy and a hero to those who cannot speak. We love our brave officers who value the lives of all our citizens – even the four legged ones.

Take a few minutes and watch this heartwarming rescue: 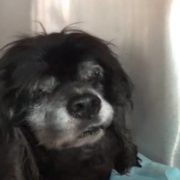 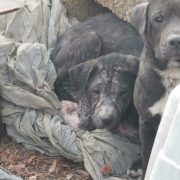 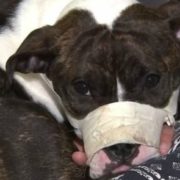 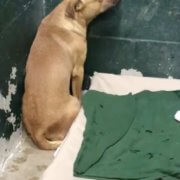 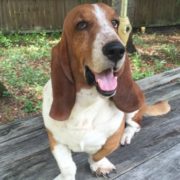 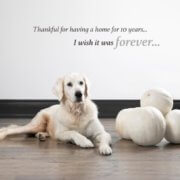 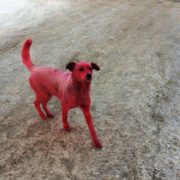 One pup didn’t survive infestation – another struggling and owner...