You are here: Home1 / News2 / Dogs3 / So many dogs had no one to save them from the floods 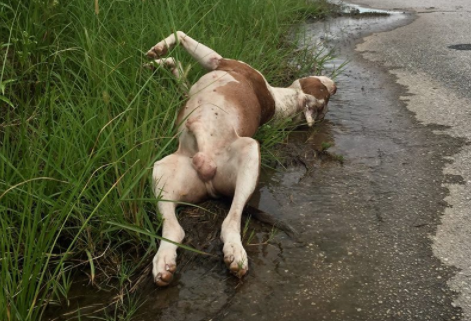 Over the past week, heartwarming images of beloved pets being saved from flood waters in storm-battered areas of Texas have been posted to social media. Photos showing people carrying dogs above the water line in cages, or piling them into boats…heading to areas that were dry and safe.

But there were dogs (undoubtedly cats as well) who had no one to save them. Dogs like Tattoo, one of many in the Houston area who lived on his own, without the care of an owner. On Friday, Adore Houston highlighted the tragic death of Tattoo to bring attention to the homeless animal problem in and around Houston.

The rescue agency wrote about the dog who was familiar to a rescuer who took it upon herself to ensure that he had food:

Tattoo had one voice and he was more fortunate than most others who have none. He was loved by an independent rescuer that used to feed him every day. Tattoo would wait for her at their special meeting place. This meeting place is an area familiar to street rescuers because it is a dumping ground for animals.

Why did the rescuer not take him in? Tattoo is on a very long list of dogs and cats the independent rescuer feeds. She is likely the reason any of them were alive prior to Harvey. She values their lives and works tirelessly to care for and network these street animals but every rescue organization and every shelter in Houston is continually operating in crisis mode. Tattoo had to wait like many others until a kind soul could find a place for him to go. That day will never come for him.

Tattoo is just one of countless “street dogs” who did not survive the flooding – a dog without an owner, a dog without someone to risk their own life to save his.

Adore Rescue is hopeful that the resources coming to the Houston area can be used to help dogs like Tattoo – dogs who have been cast aside and left to survive on their own.

Kent couple banned for life from keeping any pets after dog’s horrible...