You are here: Home1 / News2 / animal cruelty3 / Man dragged dogs behind car – claims he was training them for ra... 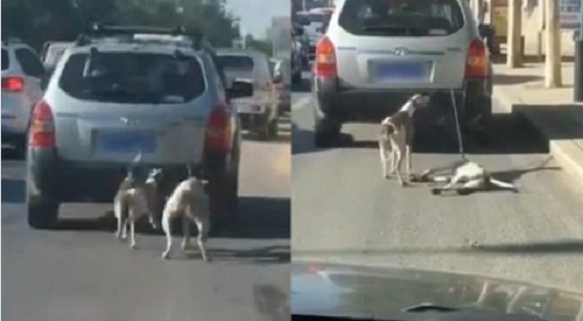 A man has been subjected to intense criticism after video of him dragging his dogs behind a car emerged on social media. According to Tuesday’s publication of the Daily Mail, the two dogs belong to Mr. Zhang, who claims that he was merely training the dogs for an upcoming race which is scheduled to take place on September 25.

The damning video was filmed in Dalian, China’s Liaoning Province – according to the Peninsula Morning Post, Mr. Zhang was shocked by the outrage that he was facing from dog lovers who were horrified to see the dogs tethered to the back of his moving SUV. He stated that the dogs typically run on a treadmill to condition for races.

Zhang’s explanation did little to appease his critics who maintain that tethering dogs behind a moving vehicle is nothing short of cruel. Especially after observing one of the tethered dogs in the social media video falling to the ground in exhaustion.

Apparently there are no current laws on the books in China to prevent this type of behavior.

You can watch the video at this link to the Daily Mail.