You are here: Home1 / News2 / Dogs3 / Man dies while trying to save dog from aqueduct

A Victorville man perished while trying to save his dog who had fallen into the California Aqueduct on Tuesday afternoon. According to CBS Los Angeles, the victim, identified as 58-year-old Lucas Hermenegildo, drowned after falling into the water while trying to rescue his dog, who had slipped into the aqueduct.

Hermenegildo and his wife had been walking along the canal, between Highway 395 and the I-15 Freeway,  with his wife and dogs when one of the dogs slipped into the water. When the man attempted to save his dog, he fell into the water and drowned – according to the San Bernardino Sheriff’s Department, Hermenegildo was in the aqueduct for approximately 10-15 minutes before he rescuers were able to pull him out.

The dog who Hermenegildo lost his life trying to save managed to escape harm.

Officials almost always advise against jumping into water to save the life of a dog…but when it comes to our four-legged companions, heeding that rule-of-thumb can be difficult to do. More often than not, dogs are more capable to safely returning to dry land than their human counterparts.

In a statement about the tragic incident, the Hesperia Police Department warned of the hidden danger, “The Hesperia Sheriff’s Station wants to remind citizens that even though the water on the surface of the aqueduct appears calm and slow moving, there is an undertow that is very fast moving and can pull a person under. Always use caution when walking along the aqueduct and maintain distance from the edge.”

Bucket list created for 18-year-old rescue dog – read all about it here. 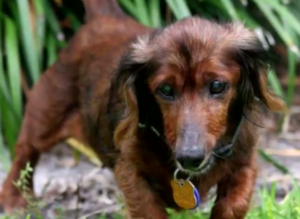