You are here: Home1 / News2 / animal cruelty3 / Man behind viral shark dragging apologizes – is it enough? 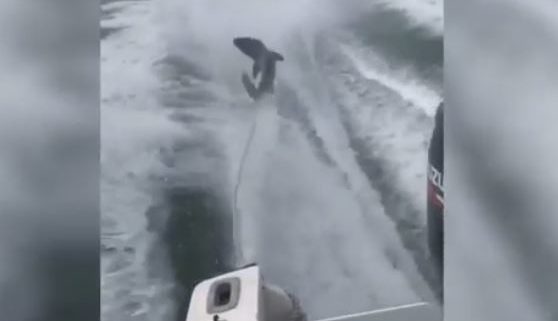 The man (not officially named by wildlife officials) behind the now viral shark dragging video has apologized for his actions reported ABC Action News. But is sorry enough? Ask most any animal lover and the answer will be a swift and resounding “No!”

The video shows a shark being dragged behind a boat which is traveling at a high rate of speed – in the boat are several men, laughing at the shark as it is thrown around in the water. According to experts, the shark was still alive, and in agony, while being dragged.

The apology from one of the un-named men in the video came via text message – the news agency reporting on the “apology” shared what the text message read:

“I realize what we did was stupid,” the message reads. “I have learned from my actions, and I am sorry. It won’t happen again.”

Florida wildlife officials have been investigating the situation, but it is unclear if any charges will be made. Apparently, charges may be forthcoming only if the shark in the video is protected.

The men in the shark dragging video apparently have a history of abusing and torturing wildlife – several other images, and video, have been discovered showing a variety of animals being subjected to cruelty. One video shows a shark (unclear if the fish is alive or dead) being used as a beer bong (beer is being poured through the gills and a man is drinking the beer), and one image shows a grouper being forced to drink beer.

In light of the apparent history of abuse, and the light-hearted banter and laughter while the shark was being mercilessly dragged, it is unlikely that anyone who cares for animals in any way, shape or manner, will be satisfied with a simple “I’m sorry.”