You are here: Home1 / News2 / animal cruelty3 / Man arrested for leaving puppy inside of mailbox

According to Wednesday’s KJAS News, an arrest has been made in the case involving a puppy who was left inside of a mailbox in Buna, Texas. The man believed to be responsible for the cruel act has been identified as 18-year-old Michael Levi Griffin.

Griffin went to the authorities in Jasper County to provide his explanation for what took place. According to a report taken by deputies, Griffin claimed that he found the puppy along Highway 96 and that he put the pup inside of the mailbox, outside of a closed veterinary hospital, in order to prevent him from being hit by a vehicle.

Griffin was arrested on Tuesday and he is facing a charge of cruelty to a non-livestock animal. The puppy, dubbed “Rari,” was adopted by a family who met and fell in love with him. Read more about Rari’s happily-ever-after at this link.

Original article about this incident here.

Comments about this situation are welcome below.

Meet a one-eyed kitty whose best friend is a dog – read more here. 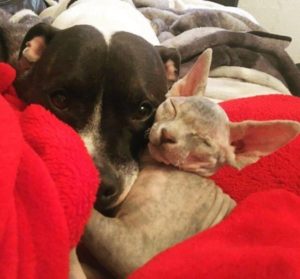