You are here: Home1 / News2 / animal cruelty3 / Man accused of roasting puppy over a fire 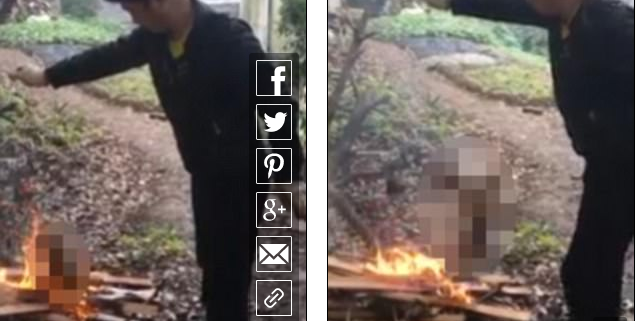 A man in China was caught on video roasting a live puppy over a fire. According to Thursday’s publication of the Daily Mail, the man was confronted by a group of people after the video was viewed by a dog-lover who decided to find him.

The woman, who goes by Ms. Jin, viewed the disturbing video on WeChat, an Asian social media platform, on October 18 – she decided to try to find the worker at the Jiujiang Power Supply Station, where he was reported to work. Ms. Jin was accompanied by several other dog owners who all went to the factory to confront the man about the cruel incident.

The man admitted to the heinous deed and told the animal lovers that he roasted the puppy because he likes to eat dog meat. The puppy in the video was not the first dog to be killed by the man, who admitted to killing another canine in the same manner.

The factory worker allegedly apologized for killing the puppy and vowed now to do so again. According to PETA Asia, there are no laws in China to protect dogs and cats from animal cruelty.

Federal ban forces dog owners to leave their pets behind when fleeing Puerto...